The primitive streak appears during POD 13 at the caudal end of the embryo as a midline structure containing the midline primitive groove surrounded by two banks of epiblast tissue on either side:

Throughout both elongation and regression, cells from the epiblast migrate toward the primitive streak and invaginate ventrally through the primitive groove.

Formulation of endoderm and mesoderm: Epiblast cells that ingress through the primitive groove during primitive streak regression become prospective endodermal and mesodermal cells. From Dias and McLone (2).

Formation of Neuroectoderm and Cutaneous Ectoderm

As cells from the epiblast are lost to the invagination process, the remaining epiblast cells spread out (a process known as epiboly) and differentiate to form the neuroectoderm (CNS) and the cutaneous ectoderm (skin).

Formation of the Notochord 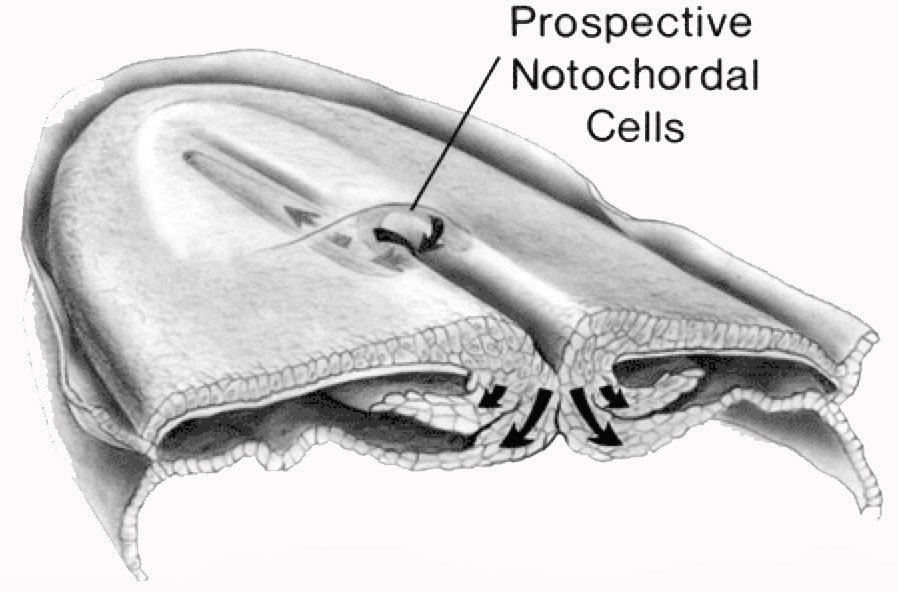 Gastrulation and Hensen’s node: Ingression of epiblast cells from Hensen’s node into the primitive pit produces prospective notochordal cells. From Dias and McLone (2).

Notochord formation: The notochordal canal exists as a tube of cells radially arranged about a central lumen, situated between the dorsal ectoderm and the ventral endoderm, From Dias and McLone (2).