Meningitis is often classified as septic (or acute bacterial meningitis), versus subacute or chronic (or aseptic) meningitis, commonly associated with viral, fungal, or protozoal infections.

The CSF obtained from lumbar puncture should be stained for microorganisms (Gram stain for bacteria, India ink or KOH prep for fungi, acid-fast stain if tuberculosis is suspected), and a rapid technique for detection of bacterial antigens such as latex agglutination should be performed. The CSF should be cultured for bacteria and for other organisms as clinically indicated, including fungi, mycobacteria, or viruses (58, 68).

Gram stain findings (31): The expected findings on microscopic examination of Gram-stained CSF for each type of meningitis listed.

Expected findings for fungal stains: Shown are findings that can appear for each type of stain.

Aspergillus infection of the brain: A coronal section of post-mortem tissue with a fungal abscess is shown in a patient with aspergillosis. (Photomicrograph courtesy of Thomas J. Cummings, M.D., Department of Pathology, Duke University Medical Center, Durham, NC.) 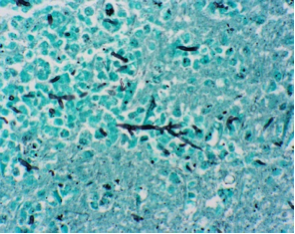