Various procedures for indirect revascularization surgery (encephalomyosynangiosis, EDAS, EGS, and EDAMS) can be adapted according to the tissues inserted into the cranial cavity. Two representative procedures, the STA EDAS and the bifrontal EGS are described below. Direct revascularization by a superficial temporal artery to middle cerebral artery anastomosis will not be discussed due to its relatively infrequent use in children.

The STA and a surrounding cuff of galeal tissue are inserted into the subdural space and placed over the cerebral convexity of middle cerebral artery territory (43).

The head is positioned according to the operation site. Often two sites, such as unilateral STA area and bifrontal area, or unilateral STA area and occipital artery area of the same side, are treated concurrently in the same field. Careful positioning with soft pads is necessary. Focal high pressure should be avoided at the previously operated areas where scalp arteries supply brain tissue. 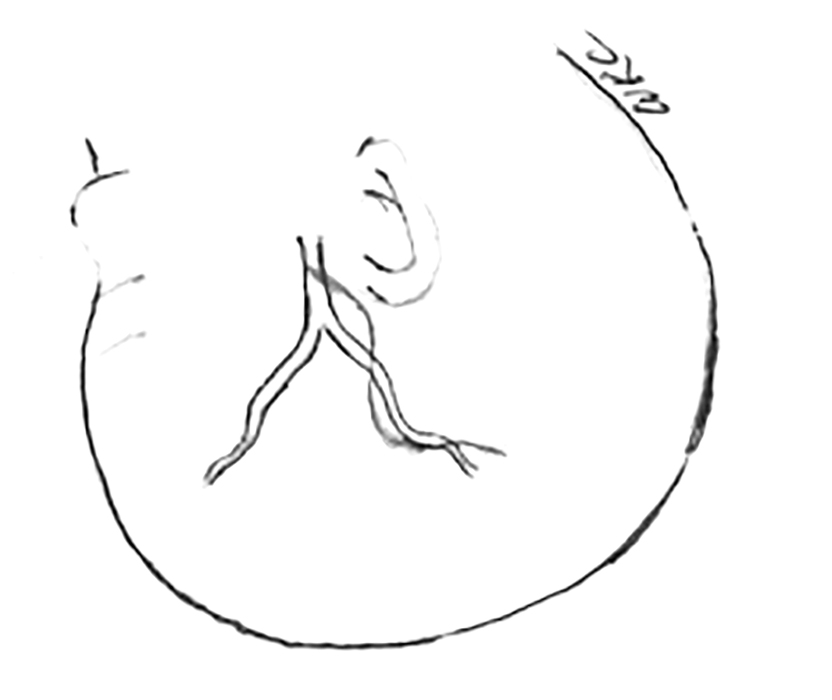 Depiction of ‘S’ incision overlying STA: An ‘S’ shape scalp incision is made on the parietal branch of STA to minimize postoperative cosmetic problems. The scalp is incised to the epi-galeal layer avoiding galeal injury (64). 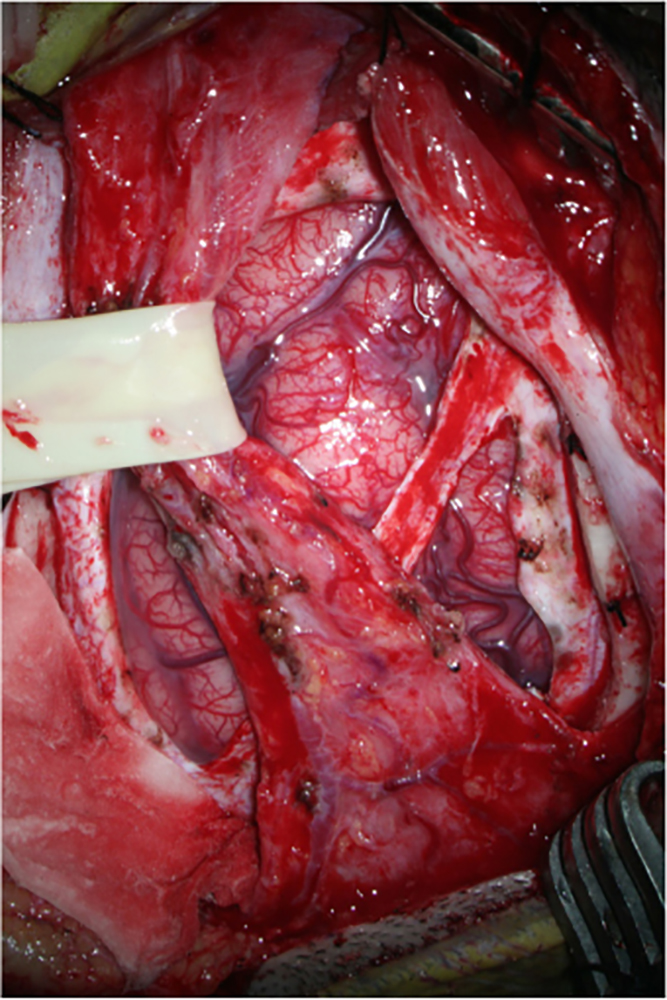 Surgical photograph of STA and galeal cuff laying on cortex: An operative photo of a left sided STA EDAS (64). The galeal flap which contains the STA was retracted by a rubber band. A branch of the middle meningeal artery was saved. Dural flaps were reflected inward into the adjacent subdural space. After this phase of operation, the arachnoid membrane was incised under a surgical microscope and the galeal flap was suture to the margin of dural opening.

Anesthesia: same as used for a STA EDAS 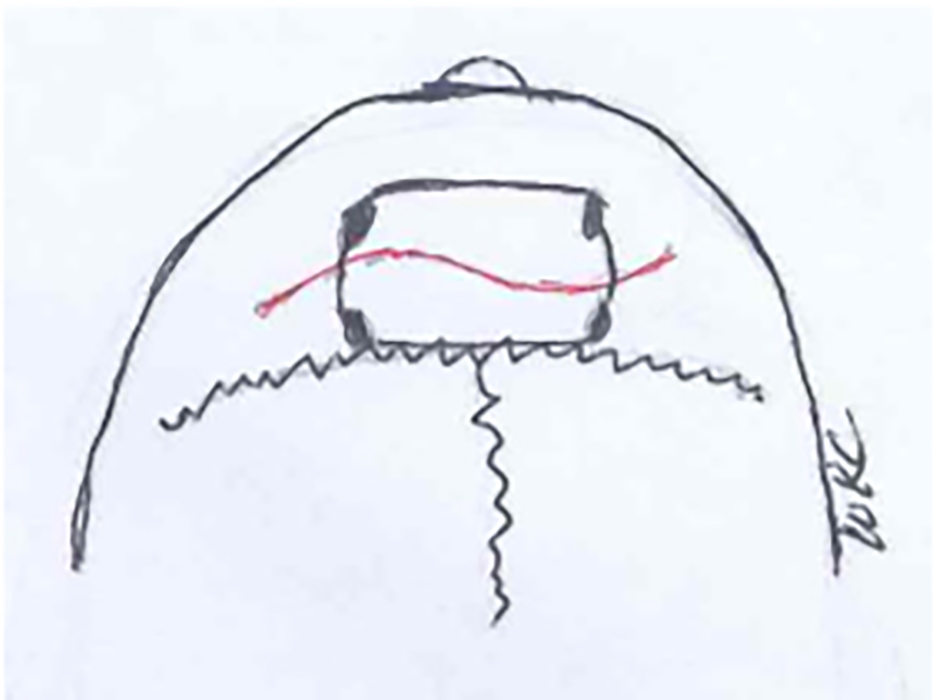 Depiction of the craniotomy and overlying ‘S’ scalp incision: A curvilinear scalp incision is made about 2 cm anterior to the coronal suture (64). 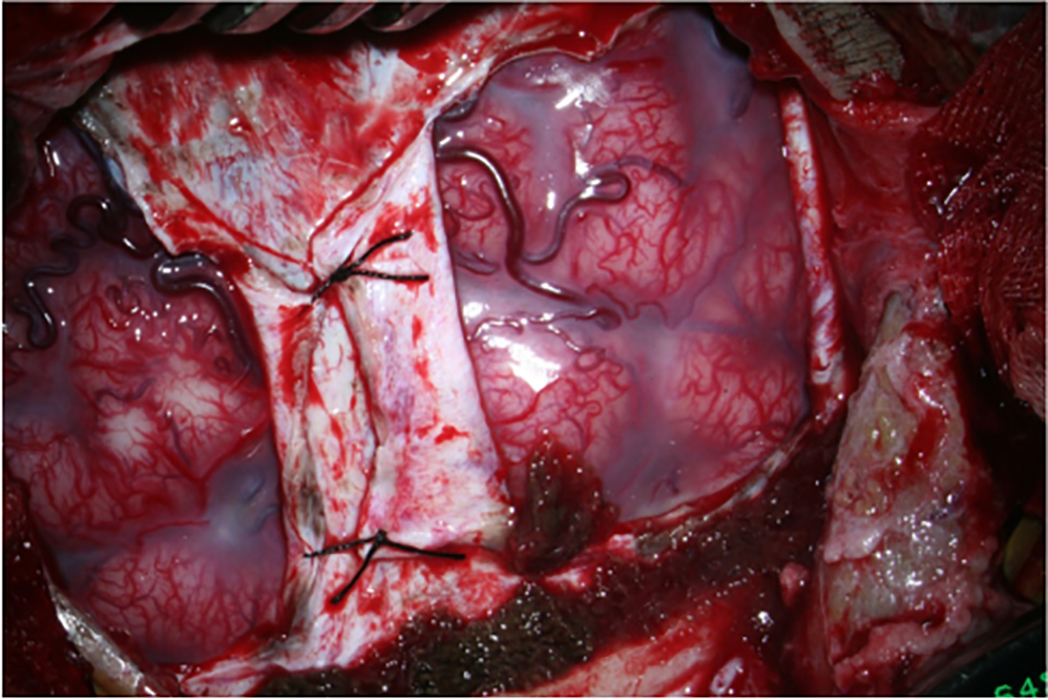 Surgical photograph of the bifrontal craniotomy for a bifrontal EGS: An operative photo of the bifrontal EGS (64). The galeal flaps of both sides, which do not contain large STA branches, were reflected to the lateral sides and a bifrontal craniotomy was performed. The dura was opened saving the superior sagittal sinus. Dural flaps were reflected inward into the lateral subdural space. After this phase of operation, the arachnoid membrane was incised under a surgical microscope and the galeal flap of each side was sutured to the margin of dural opening.

Same as for EDAS

When collateral arterial branches of STA are seen to be supplying the brain at the area of craniotomy and dural incision, multiple burr hole trephination with insertion of galeo-periosteal flaps is a potential alternative to the EGS (8).