The term molecular biology applies to the understanding of biological processes, such as tumor formation, growth, and metastasis through the study of macromolecules like DNA, RNA, and proteins involved in cellular structure and function. The central dogma of molecular biology is that the genetic code (DNA) of cells carries the set of information required for cellular function and that this information is transcribed into RNA molecules which carry out the function of directing the synthesis of proteins. 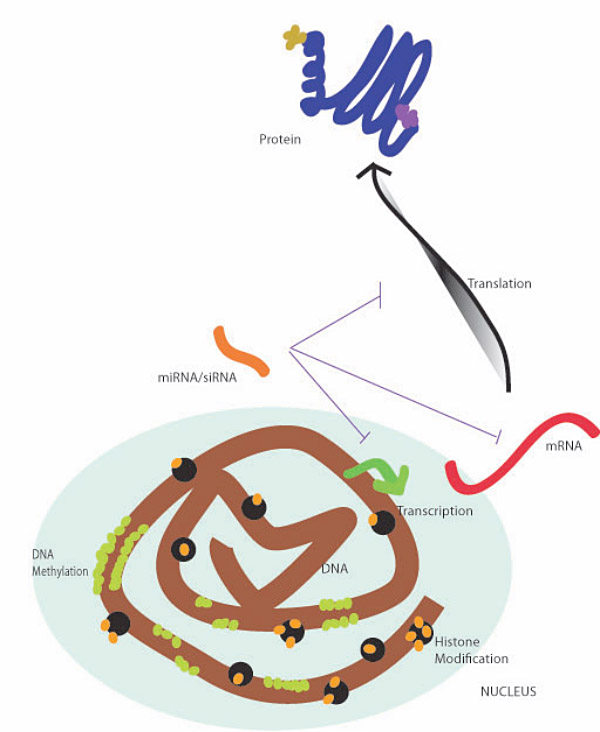 Mechanisms of gene regulation: Coding genes are transcribed in the nucleus into mRNA, which is exported into the cytoplasm where it is translated into protein. Regulation occurs epigenetically by histone modification or DNA methylation, and post-transcriptionally by siRNA or miRNA.

The transition from DNA to RNA to protein is unidirectional and specific; however, multiple feedback mechanisms are involved in the regulation of DNA, RNA, and protein structure and function. Since the genetic code is the master blue-print determining the properties of a cell, it is not surprising that cancer biologists have had a longstanding fascination with how the genetic code is copied, corrected, transmitted, and read in individual tumor cells and how these processes differ from those processes in normal cells. As such, there has been much interest in dissecting the genetic code in multiple tumors by collaborative sequencing projects such as The Cancer Genome Atlas. Improvements in sequencing technology are rapidly making accessible the full breadth of the human genome in normal and malignant cells. With this information scientists hope to decode the key genetic changes contributing to the cellular processes that are hallmarks of neoplasia, namely, failure of growth inhibition by escape from apoptosis or senescence, enhanced cellular proliferation, invasion across anatomical boundaries, establishment of a tumor niche, and metastasis. Genetic characterization of tumors is also leading toward a new understanding of the molecular diversity of seemingly identical tumors classified according to W.H.O. standards. It is also becoming apparent that genetic subgrouping of tumors can provide insight into the clinical diversity of particular tumors, and this has been demonstrated recently for medulloblastoma. Indeed, genetic analysis of patient tumor samples for confirmation of diagnosis, stratification of therapy, and prognostic determination may not be too far in the future. Rearrangement of the DNA structure through histone or nucleotide modification has been shown to be an important regulatory phenomenon for gene expression. This so-called “epigenetic” gene regulation will be the next frontier for researchers investigating how the cancer genome differs not only in its content, but also in how it is translated.

In addition to understanding the genetic makeup of malignant brain tumor cells, dissection of the regulatory mechanisms by which gene expression and protein production is controlled will be important to the development of novel therapeutic approaches. The seminal discovery in 1998 in Caenorhabditis elegans that a short double-stranded RNA could direct specific gene silencing (10) has revolutionized our understanding of the role of non-coding RNA in oncogenesis. Two small RNA-mediated gene-silencing mechanisms have been identified in mammals: the RNAi pathway and the miRNA, which is the dominant class of small RNA in mammals (2). Both pathways use small RNA molecules that are complementary to a target mRNA sequence and thereby guide translational repression or degradation of the target mRNA. This results in a loss of expression of the protein encoded by the mRNA. RNA interference is highly conserved in plants and animal cells (13). MicroRNAs are thought to play a defining role in cellular pleuripotency and differentiation and have been implicated in multiple cancers including CNS primitive neuroectodermal tumor (16), malignant gliomas (17), chronic lymphocytic leukemia (18), B cell lymphoma (19), and lung cancer. (20). Furthermore, differential miRNA expression between pediatric brain tumors and normal tissue has been identified, suggesting a potential role for miRNA tumor profiling for diagnosis and prognostic determination (21). miRNAs are able to base pair with specific tag nucleotide sequences located in the 3’ untranslated region of mRNA and direct sequence-specific endonucleolytic cleavage. The tag sequence may be shared by multiple mRNAs such that a single miRNA can regulate the expression of a number of genes (24). Additionally, imperfect base-pairing to a target sequence can result in translational repression despite lack of specific endonuclease activity, and as a consequence a single mRNA may be targeted by multiple miRNAs.  Because of the pleotropic effects of a single miRNA, and the finding of induction or repression of specific miRNAs in malignant brain tumors, potential anti-tumor effects of expressed miRNA or antagomirs (antagonists of miRNA) have been proposed. Some evidence suggests that interfering RNAs may “jump” from one cell to the next, facilitating delivery of a traditionally labile macromolecule. RNAs are very susceptible to hydrolysis due to free hydroxyl groups at the 2’ carbon of the ribose ring, and RNA-cleaving enzymes are abundant in plasma; therefore, chemical modification (28) and small molecule carrier or protection strategies are under investigation to allow antitumor interfering RNA delivery via an intravenous route in humans. Nevertheless, the specific delivery of small RNAs into the CNS still poses a challenge to both researchers and clinicians. While several phase I trials of siRNA in solid tumors and hematologic malignancy are underway (29), the use of this technology for the treatment of CNS malignancy has not yet reached clinical application. Challenges to the use of RNA interference in the CNS include the development of a reliable targeted delivery method, understanding off-target effects, and identifying critical targets involved in tumor cell growth and survival. It is encouraging that new delivery platforms such as polymeric nanoparticles, convection enhanced delivery, and focused ultrasound targeted temperature-sensitive liposomal or microbubble plasmid DNA and RNA transfer may one day allow the use of RNA interference for CNS cancer therapy.

Tremendous progress over the last 25 years in the functional characterization of signaling pathways involved in multiple cellular processes that are enhanced in cancer cells has led to the development of specific polypeptide and small molecule inhibitors. Stemming from the success of imatinib mesylate, an inhibitor of receptor tyrosine kinases, in the treatment of Philadelphia chromosome-positive CML (30) and Kit-positive gastrointestinal (16) stromal tumors (31), an era of targeted molecular therapies has been initiated. In CNS malignancy, an important example of targeted therapy is bevacizumab, a monoclonal antibody that binds circulating VEGF. Bevacizumab blocks VEGF binding to the VEGF receptor, resulting in a reduction in new blood vessel formation. An objective clinical response with the use of bevacizumab has been observed in adults with recurrent glioblastoma multiforme and anaplastic gliomas (32). However, malignant gliomas in children do not appear to respond in the same manner as adult tumors. The difference in response to this therapy may result from a different signaling ground state in adult versus pediatric vasculature and variation in the mechanisms of tumor angiogenesis. Since the protein signaling networks and regulatory processes involved in a number of cellular processes in malignant cells are still unknown, there is a growing need to study protein interactions and signaling pathways at a high throughput level. In understanding the critical cellular processes that drive tumor initiation, growth, invasion, and metastasis, we will learn how to control these processes and thus provide less toxic and more effective therapies.

Please create a free account or log in to read 'Definition, Approaches, and Clinical Application of Molecular Biology of Brain Tumors in Children'